From WikiIslam, the online resource on Islam
Revision as of 23:37, 7 March 2021 by IbnPinker (talk | contribs) (→‎Links to Islamic Terrorists)
(diff) ← Older revision | Latest revision (diff) | Newer revision → (diff)
Jump to navigation Jump to search
A checked version of this page, approved on 7 March 2021, was based on this revision. 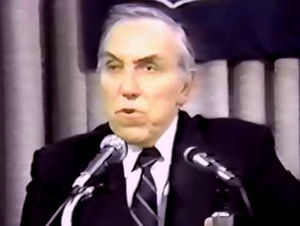 Keith Leon Moore (born 5 October 1925 in Brantford, Ontario) is a professor emeritus in the division of anatomy, in the Faculty of Surgery, at the University of Toronto, Ontario, Canada. Moore is associate dean for Basic Medical Sciences in the university's Faculty of Medicine, and was Chair of Anatomy from 1976 to 1984. He is a founding member of the American Association of Clinical Anatomists (AACA),[1][2] and was President of the AACA between 1989 and 1991.[3]

Dr. Moore is notable as the only embryologist directly quoted by Islamic sources in an attempt to prove embryology as described in the Qur'an is scientifically correct. In the 1980s he accepted an invitation by the Embryology Committee of King Abdulaziz University to produce a special 3rd edition of his most successful book "The Developing Human" specifically for use by Muslim students in Islamic Universities. He was financially patronized by the Saudi royal family for the use of his name, and for no real additional work.

The textbook he delivered to the Saudi Universities that commissioned the work is titled, "The Developing Human: Clinically Oriented Embryology with Islamic Additions."[4] The base textbook was work that Moore had completed years before. He did nothing new for this new edition. The “Islamic additions” are actually the work of an Abdul Majeed al-Zindani, so it alternates chapters of standard science with Zindani's "Islamic additions".

The co-writer of Moore's book is a leading militant Islamist named Abdul Majeed al-Zindani. He is the founder and head of the Iman University in Yemen, head of the Yemeni Muslim Brotherhood political movement and founder of the Commission on Scientific Signs in the Quran and Sunnah (one of the organizations that spearheaded Bucailleism), based in Saudi Arabia.[5]

Zindani served as a contact for Ansar al-Islam (Al), a Kurdish-based terrorist organization linked to al-Qaeda, has links to John Walker Lindh and Anwar al-Awlaki, and in 2004 the US Treasury Department published a press release stating that the United States had by executive order designated Zindani as a "Specially Designated Global Terrorist".[6]

Interestingly, the Acknowledgments for the book recognize a number of “distinguished scholars” who supported the book with time or money. And number 6 on the list is Saifullah Shaykh Osama bin Laden (Zindani had a long history of working with bin Laden, notably serving as one of his spiritual leaders).[6]

The result of Moore's and Zindani's collaboration is not an academic book and subsequent editions omit and contradict the "Islamic additions". Reverting back to his previous description, they basically admit that the embryology in the Qur'an is a repetition of Greek and Indian medicine[7]

For example, in 1986 he wrote that "The drop or nutfa [in Surah 23:13] has been interpreted as the sperm or spermatozoon, but a more meaningful interpretation would be the zygote which divides to form a blastocyst which is implanted in the uterus ("a place of rest"),"[8] but in the 8th edition of The Developing Human (published 2007), he writes that "Growth of science was slow during the medieval period... human beings [according to the Qur'an] are produced from a mixture of secretions from the male and female. Several references are made to the creation of a human being from a nutfa (small drop). It also states that the resulting organism settles in the womb like a seed, 6 days after its beginning."[9]

It is interesting with regard to Dr Keith Moore's sincerity (or lack thereof) to note that during his lecture tours to promote his book to Muslim audiences, he stated many times that he never left his Christian faith to become a Muslim[10], and admitted that he had no knowledge of Arabic, that Muslim scholars had translated the Arabic words for him, and that he is not claiming his interpretations are accurate[11]. Indeed, it is evident how badly he was misinformed about the Qur'an in the above quote regarding 6 days. There is nothing about 6 days in any statement about embryology anywhere in the Qur'an nor even in the hadiths.

This shows that Moore's previous statements on embryology in the Qur'an were not based on a sound knowledge of Islamic scriptures, but merely the result of patronage by the Saudi royal family.

J. Needham, a well known authority on the history of embryology and a reference cited in Keith Moore's books, has also dismissed embryology in the Qur'an as merely "a seventh-century echo of Aristotle and the Ayer-veda."[12]

Moore's current CV does not reflect any involvement with Islam, the Qur'an or Islamic embryology. It also omits mentioning the 3rd edition of The Developing Human and its connections to Islamic terrorists. Nor does he mention his lecture in Saudi Arabia or any of his Islam-related activities in Muslim-majority countries.

In 2002, Moore declined to be interviewed by the Wall Street Journal on the subject of his work on Islam, stating that "it's been ten or eleven years since I was involved in the Qur'an."[13]