Cat's Eye Nebula in the Qur'an 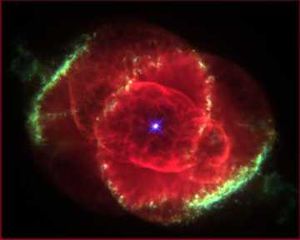 Muslims claim that the Cat's eye nebula was foretold in the Qur'an (55:37-38) “And when the heaven splitteth asunder and becometh rosy like red hide.”

This picture was taken by the NASA Hubble Space Telescope of the "Cat's Eye Nebula", an explosion of a supernova that took place 3,000 years ago. This is a glass hour explosion seen from the top. At the center the star is visible. There are virtually millions of these explosions that can be detected in our own galaxy. Such explosions have been taking place for billions of years and will continue to take place for trillions of more years. Virtually all stars, when exhaust their fuel or burn enough hydrogen will die and if they are supernovas they explode and emit gasses from their north and south poles looking like glass hours.

This nebula is much more complex than other nebulas suggesting that the star might be a double-star system. The dynamical effects of two stars orbiting one another can explain this intricate structures. (The two stars are too close together to be individually resolved by Hubble, and instead, appear as a single point of light at the center of the nebula.) 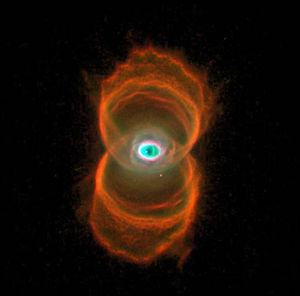 This hour glass nebula is another similar explosion located 8,000 light years away.

The Cat's Eye Nebula that can only be seen with the help of the most powerful telescope outside the atmosphere of the Earth has nothing to do with what Muhammad said. It is not scary at all. It took place some 1500 years before Muhammad was born, it virtually has no effect on our solar system and our planet.

The photographs are taken by NASA in infrared or X-ray spectrum. So, the photos that you see are actually invisible most times to the naked eye (since we cannot see infrared and X-ray as colors). False colors are added by NASA at the time of releasing the pictures. The way the false color algorithms work is that you can give any color and it will shade the picture accordingly in that spectrum or band. Check up on "false color" term as applies to satellite or telescope imagery. So the explosion is not actually rosy. NASA has given this color to the picture but they could have given any color and the entire argument is baseless.

Here are some other nebulas formed by dying stars. The variety of colors is due to the different composition of gases that they emit. Our sun will have the same end. But the earth will become dry billions of years before that happens; not a single drop of water will be left and of course humans and other forms of life will disappear much earlier.