From WikiIslam, the online resource on Islam
Revision as of 04:55, 1 September 2013 by Sahab (talk | contribs)
(diff) ← Older revision | Latest revision (diff) | Newer revision → (diff)
Jump to: navigation, search
A checked version of this page, approved on 1 September 2013, was based on this revision. 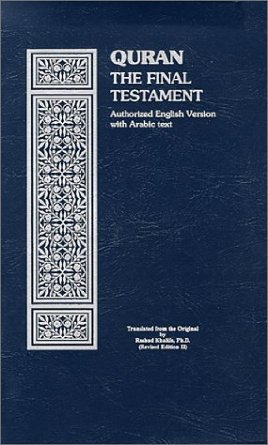 This page lists verses of the Qur'an in which Dr. Rashad Khalifa believed he was implied as the final messenger of Islam. It also lists verses which were removed by Khalifa from his own translation in order to make it conform with the alleged numerical code.

All verses quoted are taken from Rashad Khalifa's own translation.

We have sent you (O Rashad) to this community, just as we did for other communities in the past. You shall recite to them what we reveal to you, for they have disbelieved in the Most Gracious. Say, "He is my Lord. There is no god except He. I put my trust in Him alone; to Him is my ultimate destiny."

We have sent messengers before you (O Rashad), and we made them husbands with wives and children. No messenger can produce a miracle without GOD's authorization, and in accordance with a specific, predetermined time.

We have sent you (Rashad) as a deliverer of good news, as well as a warner.

We have sent you (O Rashad) to all the people, a bearer of good news, as well as a warner, but most people do not know.

Say, "I ask you to do one thing: Devote yourselves to GOD, in pairs or as individuals, then reflect. Your friend (Rashad) is not crazy. He is a manifest warner to you, just before the advent of a terrible retribution."

Most assuredly, you (Rashad) are one of the messengers.

Are they saying, "He (Rashad) has fabricated lies about GOD!"? If GOD willed, He could have sealed your mind, but GOD erases the falsehood and affirms the truth with His words. He is fully aware of the innermost thoughts.

Your friend (Rashad) is not crazy.

All verses quoted are taken from Yusuf Ali's translation.

Now hath come unto you a Messenger from amongst yourselves: it grieves him that ye should perish: ardently anxious is he over you: to the Believers is he most kind and merciful.

But if they turn away, Say: "Allah sufficeth me: there is no god but He: On Him is my trust,- He the Lord of the Throne (of Glory) Supreme!"