Muhammad in the Bhavishya Purana

From WikiIslam, the online resource on Islam
(Redirected from Bhavishya Purana)
Jump to navigation Jump to search

The Bhavishya Purana (Sanskrit:भविष्य पुराण, literally "the future Purana") is one of the eighteen major Hindu Puranas. It is traditionally ascribed to the Rishi Vyasa, the compiler of the Vedas, although the actual authorship remains unknown and the document is likely the work of many hands. Like the other mahapuranas it is written in Sanskrit.[1] The title Bhavishya Purana signifies a work that contains prophecies regarding the future or a "history of the future."[2] The full text of the purana itself was put to writing at a relatively late date, and much of the material in it likely consists of later accretions to the original core text.

Popular Indian Islamic preachers and apologists such as Dr. Zakir Naik often make the claim that the Hindu scriptures, the Bhavishya Purana in particular, predict the mission and life of Muhammad, and that this constitutes a miracle. This claim is a relatively recent invention, and is not often made outside of India to non-Hindus. There do appear to be passages in the Bhavishya Purana that that describe Muhammad, but some of these are hostile and appear to paint him as a mlecha, a dastardly foreigner, or even as a demon. Rather than being an actual example of a prophesy, most scholars view these references as an example of Vaticinium ex eventu, a prophecy being placed in the mouth of a prophet by a writer composing after the fact, in order to attribute divine prophesy to his character.

The "mahapuranas" or "great puranas" are traditionally counted at 18, but many more puranas exist outside of these, composing a vast mass of mythological and historical literature on the history of Hindu kings, gods and people. The word "purana" पुराण in both Hindi and Sanskrit means "old" or "ancient" and the Puranas are thus "the tales of the ancients." They are traditionally attributed to Vyasa, the narrator of the Mahabharata. They purport to relate the history of the world from its creations. Like most of the Sanskrit Hindu scriptures, the puranas were originally oral texts handed down from teacher to pupil by the priestly brahmin caste. Unlike the Vedas, though, the Puranas show the deep influence of the medieval, popular bhakti worship movement in addition to the high-caste brahmin conception of dharma [3] The actual composition of the puranas happened far after their supposed composition according to the tradition, and the texts themselves show much evidence of accretions, editions, additions and subtractions along the way to finally being written down. The texts as they come to us in modern times appear to be an amalgation of multiple texts across generations, a veritable encyclopedia of spirituality, myth, chronicles of kings and heroes, as well as devotional and philosophical literature.

Contents and Composition of the Bhavishya Purana

The Bhavishya Purana purports to tell the "history of the future" (Bhavishya भविष्य means the future both in Sanskrit and modern Hindi) and also contains a description of the genesis of the worship of Lords Vishnu, Shiva and Surya. Like the other puranas much more recent material has been added to the primordial core of orally composed text, and scholars agree that the "prophecies" which it contains are actually examples of Vaticinium ex eventu "prophecies after the fact", historic events introduced into a "prophetic" text to make it appear to have prophetic powers of future understanding. The bulk of the text, despite the name, deals mostly with descriptions of brahmin ceremonies and feasts, the duties of different casts, and the borrowed creation story from the law-book of Manu. As such, the text that has come down to us is almost certainly not the ancient work which is quoted in the Apastambiya-Dharma-sutra but rather a more recent text. Other notable features of the text are a description of the Nagapancami feast, dedicated to the worship of snakes as well as the sun-worship in the lands of Sakadvipa, perhaps "Scythia", and the "Maga", which are undoubtedly references to the Zoroastrian and related religions of the Dardic-speaking Persian and Scythian peoples.

Islamic du'aah such as Zakir Naik sometimes mention that Prophet Muhammad was predicted in the Hindu scriptures, especially when speaking to an Indian audience. The Bhavishya Purana is prominent in this regard. but what they fail to convey accurately is the nature of these references. Muhammad is depicted as a reincarnated demon, Islam as a demonic religion, and its followers as "the corrupters of religion".[4]

Text of the alleged Prophecy 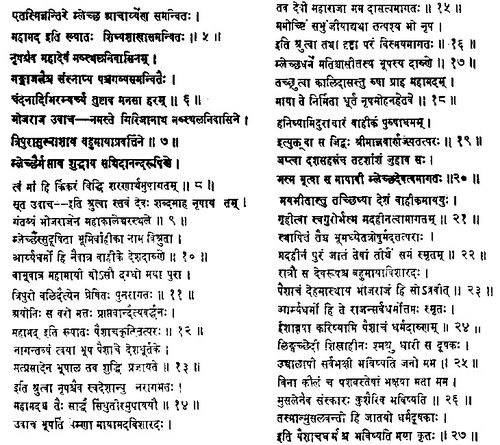 Shri Suta Gosvami said: In the dynasty of king Shalivahana, there were ten kings who went to the heavenly planets after ruling for over 500 years. Then gradually the morality declined on the earth. At that time Bhojaraja was the tenth of the kings on the earth. When he saw that the moral law of conduct was declining he went to conquer all the directions of his country with ten-thousand soldiers commanded by Kalidasa. He crossed the river Sindhu and conquered over the gandharas, mlecchas, shakas, kasmiris, naravas and sathas. He punished them and collected a large ammount of wealth. Then the king went along with Mahamada (Muhammad), the preceptor of mleccha-dharma, and his followers to the great god, Lord Shiva, situated in the desert. He bathed Lord Shiva with Ganges water and worshipped him in his mind with pancagavya (milk, ghee, yoghurt, cow dung, and cow urine) and sandalwood paste, etc. After he offered some prayers and pleased him.

Suta Goswami said: After hearing the king’s prayers, Lord Shiva said: O king Bhojaraja, you should go to the place called Mahakakshvara, that land is called Vahika and now is being contaminated by the mlecchas. In that terrible country there no longer exists dharma. There was a mystic demon named Tripura (Tripurasura), whom I have already burnt to ashes, he has come again by the order of Bali. He has no origin but he achieved a benediction from me. His name is Mahamada (Muhammad) and his deeds are like that of a ghost. Therefore, O king, you should not go to this land of the evil ghost. By my mercy your intelligence will be purified. Hearing this the king came back to his country and Mahamada (Muhammad) came with them to the bank of the river Sindhu. He was expert in expanding illusion, so he said to the king very pleasingly: O great king, your god has become my servant. Just see, as he eats my remnants, so I will show you. The king became surprised when he saw this just before them. Then in anger Kalidasa rebuked Mahamada (Muhammad) “O rascal, you have created an illusion to bewilder the king, I will kill you, you are the lowest..."

That city is known as their site of pilgrimage, a place which was Madina or free from intoxication. Having a form of a ghost (Bhuta), the expert illusionist Mahamada (Muhammad) appeared at night in front of king Bhojaraja and said: O king, your religion is of course known as the best religion among all. Still I am going to establish a terrible and demoniac religion by the order of the Lord . The symptoms of my followers will be that they first of all will cut their genitals, have no shikha, but having beard, be wicked, make noise loudly and eat everything. They should eat animals without performing any rituals. This is my opinion. They will perform purificatory act with the musala or a pestle as you purify your things with kusha. Therefore, they will be known as musalman, the corrupters of religion. Thus the demoniac religion will be founded by me. After having heard all this the king came back to his palace and that ghost (Muhammad) went back to his place.

The intelligent king, Bhojaraj established the language of Sanskrit in three varnas - the brahmanas, kshatriyas and vaisyas - and for the shudras he established prakrita-bhasha, the ordinary language spoken by common men. After ruling his kingdom for 50 years, he went to the heavenly planet. The moral laws established by him were honored even by the demigods. The arya-varta, the pious land is situated between Vindhyacala and Himacala or the mountains known as Vindhya and Himalaya. The Aryans reside there, but varna-sankaras reside on the lower part of Vindhya. The musalman people were kept on the other side of the river Sindhu.

On the island of Barbara, Tusha and many others also the followers of Isamsiha were also situated as they were managed by a king or demigods.[5]

Some Islamic dawah sites make use of this text as proof that Muhammad was foreseen by the Hindu scriptures themselves, and thus Hindus should follow him. [6][7] Although the mention that Muhammad was apparently mentioned in the Purana, they don't mention its late nature, the nature of the puranas, and they tend to literally attribute them to the rishi (ऋषि) Vyasa, when in fact scholarly opinion and even the traditions of Hinduism itself clearly agree upon the fact that this purana like all of the others was the work of many hands over an extremely long period. Furthermore they usually only provide part of the quote, failing to reproduce the passage in full:

"That city is known as their site of pilgrimage, a place which was Madina or free from intoxication. Having a form of a ghost (Bhuta), the expert illusionist Mahamada (Muhammad) appeared at night in front of king Bhojaraja and said: O king, your religion is of course known as the best religion among all. Still I am going to establish a terrible and demoniac religion by the order of the Lord . The symptoms of my followers will be that they first of all will cut their genitals, have no shikha, but having beard, be wicked, make noise loudly and eat everything. They should eat animals without performing any rituals. This is my opinion. They will perform purificatory act with the musala or a pestle as you purify your things with kusha. Therefore, they will be known as musalman, the corrupters of religion. Thus the demoniac religion will be founded by me. After having heard all this the king came back to his palace and that ghost (Muhammad) went back to his place."

It is clear that the author of this passage was an opponent of the religion he was describing; he includes a number of derogatory references to it, calls "Mahamada" an "illusionist" indicating that his miracles were not real, and falls back upon the wickedness of Muslims in how they consume meat, a trope which remains to this day in Hindu polemic and media about Muslims. Rather than being a miraculous prophecy of the coming of Muhammad, the Bhavisya Purana is clearly (in this spot) a late text sacralizing Hindu Brahmin stereotypes about Muslims.